Soft4Cad Team developed the AutoCAD application (plugin) which helps designers to layout insulating system on the building roofs. TekhnoNIKOL Corporation is one of the largest manufacturers and suppliers of roofing, waterproofing and insulating materials. The main functional of the developed program is similar to the program for the Rockwool Company, but this program has a lot of additional features which speeds up design process.

Soft4Cad team developed an AutoCAD application (plugin) to helps designers to layout insulation system for building roofs. TekhnoNIKOL Corporation is one of the largest manufacturers and suppliers of roofing, waterproofing and insulation materials.

The main function of the program is similar to the program for the Rockwool Company. However, this program has many additional features which speed up the design process.

In the screenshot pictured below, you can see the menu and main program functions.

Menu of the Program

These two buttons allow users to draw lines on the special layer. Next,Valleys are needed to layout basic slopes. 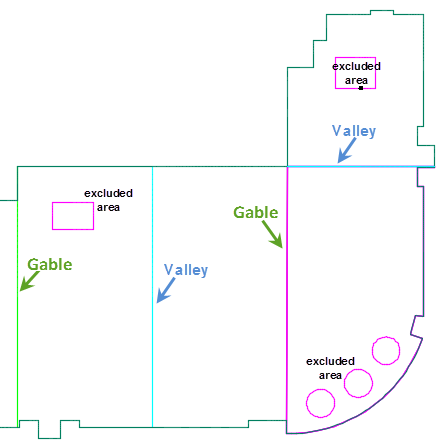 Valleys and Gables on the Drawing

It is possible to layout different insulation systems (ex. XPS, KB and PIR) with different steepnesses. During the layout phase, each basic slope gets its own number for easy navigation and identificaiton in the project reports.

Additionally, users can exclude any inside regions from the insulation layout and set the steepness coefficient for basic slopes. The coefficient is needed for steepness magnification.

Also, users can set the thermal insulation thickness in millimeters - the basic, flat insulation layer on the roof. In the future, extraw thickness will be added for the fastener length.

Basic slope layout is not limited to rectangular areas. Any regular polygons are possible.


Let's examine basic slope in detail. Look at the a basic slope number 3, insulation system KB and steepness 4.2%. Before laying out the basic slope, the user must set the steepness coefficient to 2 and extra thickness of the basic flat layer to 150 mm.

Example of the Basic Slope

Each opposite slope gets its own serial number and description as well as basic slpope.

During layouting basic slopes and opposite slopes the program automatically calculates fixture lengths (self-tapping screws) for each slab. If opposite slope sets on the basic slope, program counts summary lenght for both. Also programm takes into account extra thickness of heat insulation flat layer. On the figure below you can see that program doesn't count fasteners twice.

Self-tapping Screws Lengths for Basic and Opposite Slopes

After all basic slopes and opposite slopes have been laid out, the roof can be divided into 3 zones: Corner Zones, Edge Zone, and Inner Zone. Each zone has its own parameters for the number of fasteners needed to attach isulation blocks.

Zones on the Roof - Window

Zones on the Roof

The screenshot below provides an overview of the list of output documents.

The Summary Specification counts the total amount of slabs in all projects. Results tables are divided by type.

The Detailed Specification counts the slabs for each basic slope and opposite slope separately.

The program creates two types of tables - summary tables for fastener lengths in the projects and separate table for each opposist basic slope. The table shows how many fasterns you need to attach to the slabs of the roof. If under basic slope, there is an additional layer (ex. extra thickness, swaterproofing), this thickness is also taken into the account.

You can also create fastener specifications for any corner, edge or inner zone, or any region.

And finally user can switch on layer 3D TECHNONIKOL and program creates 3D model of basic and opposite slopes automatically.